Trending
Low-Carb Revisited: Science and Subjectivity of the Atkins Diet Lifestyle Black History Month, Some Lesser-Known but Very Influential Figures The New Economics of Rare-Earth Medals Gas Priceing and Politics Distilling a "Positive Economics" Retrospective: Thoughts on Politics and the Democrats from Early Summer 2007 Tips for Saving Money when it Comes to Buying Groceries Science: How Quantum Mechanics Has Helped Us Introductory Economics - Lesson 2 Local Politics in Oregon
history

In honor of Black History Month, here are a few people who had tremendous achievements but are not as commonly known as Rosa Parks, Martin Luther King Jr., George Washington Carver or Booker T. Washington.

Elijah McCoy, the real “real McCoy.” We’ve all heard the term, “Is it the real McCoy?” That means is it the real thing, the genuine article and not a cheap imitation. The term may refer to Elijah McCoy, a prolific African-American inventor who received over fifty patents. His specialty was in the area of lubrication of industrial machinery and locomotive engines. He invented a lubricator cup that allowed machines to be lubricated while they were still in operation. Although the origin of the expression “the real McCoy” is disputed, many people feel the idiom was first used by customers wanting Elijah McCoy’s products and nothing less.

Joseph Rainey. In the decades following the Civil War, there were several African Americans elected to the U.S. Senate and House of Representatives. The first black elected to the U.S. House was Joseph Hayne Rainey, a Republican from South Carolina. Once, when the Speaker of the House was absent, Rainey was chosen to lead the meeting, thereby becoming the first black to preside over Congress. 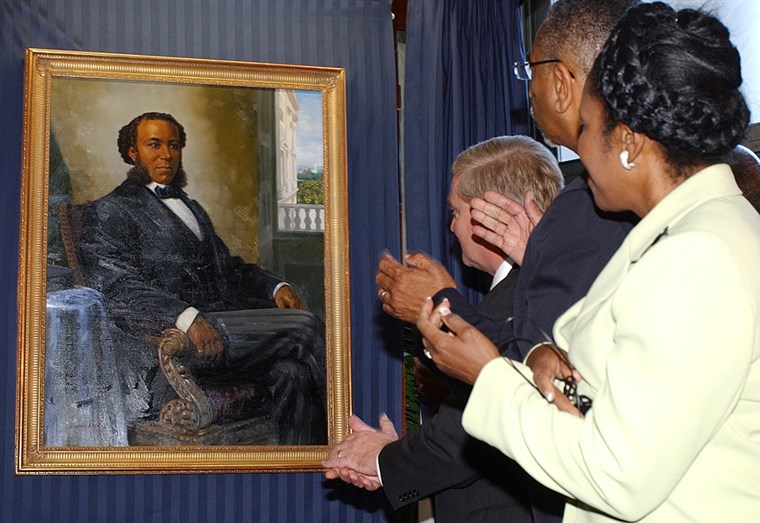 George H. White. If Rainey was the first black Congressman, then White was the last, at least for a while. Although blacks had been elected to Congress sporadically over the last decades of the 19th century, by 1900 only one African American remained in the House of Representatives. He was George H. White, a Republican from North Carolina. The Southern Democrats had retaken the South and set up barriers that prevented blacks from gaining office. When White left the House in early 1901, not one black remained in the House and none was elected again until 1928, when Oscar De Priest of Chicago became the first black elected to Congress in the 20th century.

Matthew A. Henson. Originally from Nanjemoy, Charles County, Maryland, Henson was the first known human to reach the North Pole. An assistant to Rear Admiral Robert E. Peary, Henson accompanied Peary on six trips to the Arctic between 1891 and 1908. On the final trip, with Peary weary and suffering from the loss of most of his toes due to frostbite, Henson led the final push of the expedition and arrived at the North Pole before anyone else. When Peary arrived, he gave Henson the honor of planting the U.S. flag at the pole. Upon his return home Peary was celebrated and honored while Henson was largely ignored and forced to spend the rest of his life in obscurity. Decades after his historic trip, Henson was “rediscovered” and bills were introduced in Congress to honor the explorer who is credited with co-discovering the North Pole. In 1988, Henson’s remains were moved from New York and reinterred at Arlington National Cemetery next to the grave of Peary. Guion Bluford, the first African-American astronaut to fly into outer space, gave the ceremonial eulogy.

James Weldon Johnson and “Lift Every Voice and Sing.” During the height of the African American Civil Rights Movement (1955-1968), “We Shall Overcome,” a protest song popularized by folk singer Pete Seeger, became the unofficial black national anthem. But before that “Lift Every Voice and Sing,” an uplifting spiritual song written by James Weldon Johnson and his brother Rosamond, was known as the first Negro national anthem. Johnson was an educator, civil rights leader, diplomat and writer, and he became the first African American admitted to the Florida bar as a lawyer.

Jan Ernst Matzeliger. For decades inventors had grappled with the problem of shoe lasting, or shaping the upper portion of a shoe over the last (the shoe form), and attaching this leather to the bottom of the shoe, the sole. Matzeliger invented the shoe-lasting machine, a complex device that revolutionized the shoemaking industry. Simply put, his machine automatically stitched the shoe leather to the sole of the shoe, greatly reducing the cost of making shoes. Sadly he died of tuberculosis before reaching age 40.

Madam C.J. Walker. Nearly everyone has heard of Oprah Winfrey. Her contributions as a television host and interviewer, coupled with her business acumen, has made her a fortune. But how many people have ever heard of Madam C.J. Walker, who was the first black American woman to become a self-made millionaire as the result of her enterprises and inventions? Her primary areas of interests were hair-care products and cosmetics. Her success in business paved the way for Winfrey and others who followed in her footsteps.

Garrett Morgan. He made two key inventions, the gas inhalator and the traffic light. His breathing mask paid immediate dividends in saving lives when it was first demonstrated in rescuing workers trapped in a tunnel after an explosion.

Percy Julian. Virtually unknown outside the world of chemistry, Julian was one of America’s greatest scientists. Nicknamed “the soybean chemist,” he created drugs to treat glaucoma and arthritis and his inventiveness allowed him to amass 86 patents.

Lewis Latimer. The only African-American member of Thomas Edison’s research team, Latimer is credited with inventing the first electric light with a carbon filament.